One of our Carnival silent auction items this year was for the chance to be Principal for the Day.  Well, that day was Thursday, June 22nd, and what great principals we had.  So did they simply sit in the office and suspend students?  Did they ban homework and extend recess?  Let’s find out in their own words:

Being the ‘’New principal’’ was a fun experience to have done in life,

I’ve got to say, this was never a task I thought I would ever do or ever thought of doi 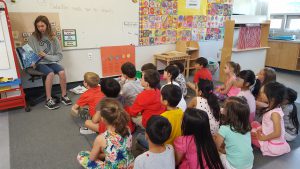 ng. It was a different experience than I thought it would be like, I guess principals don’t eat chocolate cakes or ride to school in limousines, but they still do have loads of fun. As principal for the day, I read to kindergartens, I made coffee, I organized the gym room and it was also surprisingly fun. I did some real work like, I unlocked the school doors, I even made an actual phone call to Buckingham school asking to borrow 20 tables, which was very nerve racking when I was on the phone. I made this short blurb, announced my new job to the school and went out for recess supervision. I even taught gym class which was loads of fun, I picked a game added a few rules or two, yelled orders of how to play and the teams assigned, and I even got to join in on the fun and got assigned to a capture the flag team myself. I had a lot of fun being the principal for the day and I hope I’ll get to sub in as Mr. Gurney another time for this fun and amazing school.

I never knew that being a principal involved that much responsibility, but it was fun though.  I got to read to a grade 1 class, I helped organize the skipping ropes in the storage room, I made announcements, I got to give an extra recess to the students, and I supervised outside.  I had pizza in my new office with my friends, I taught PE to a class, and I had a lot of fun.  I really liked putting paper in the shredder probably most of all, and missing an afternoon of school was great too.  I really hope that I get a chance to do this again.

Big thanks to Mr. & Ms. Woudstra for being such great sports and taking on the role so well…and even sharing a little pizza with me as well.  Can’t wait until we do it again.